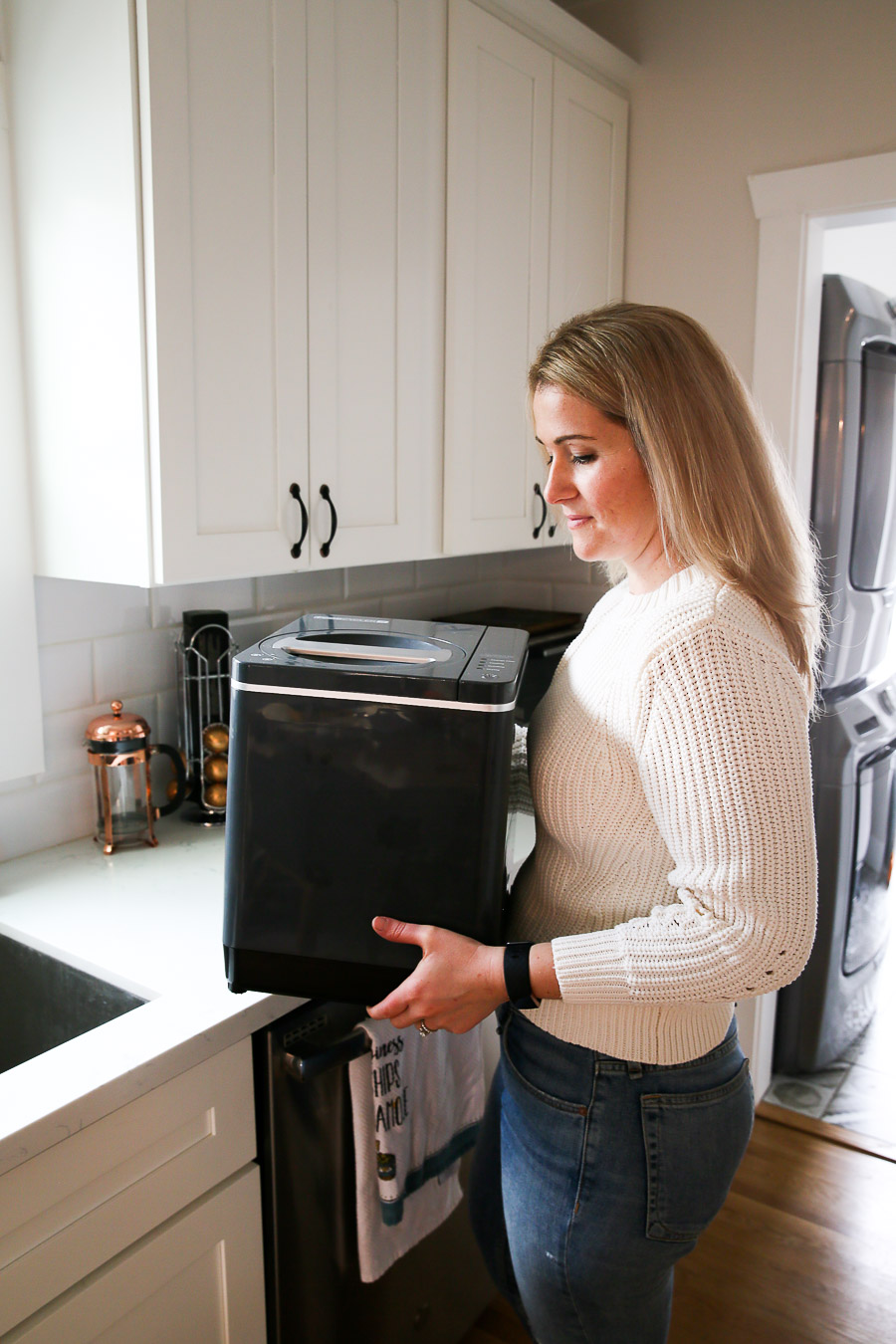 I hate kitchen gadgets. I know. Me. The food blogger. The home cook. Can’t stand them. After gathering the basics years ago and then entering the “fun gadget” phase, I’ve put an end to new kitchen things that take up valuable space and don’t get used very often (if at all).

But now I have a new gadget and it’s my favorite thing. Because it makes composting at home doable, fast, and easy! This Foodcycler electric composter is so amazing for so many reasons…

{The Foodcycler* was gifted to me after I requested it because I was so excited about it.} 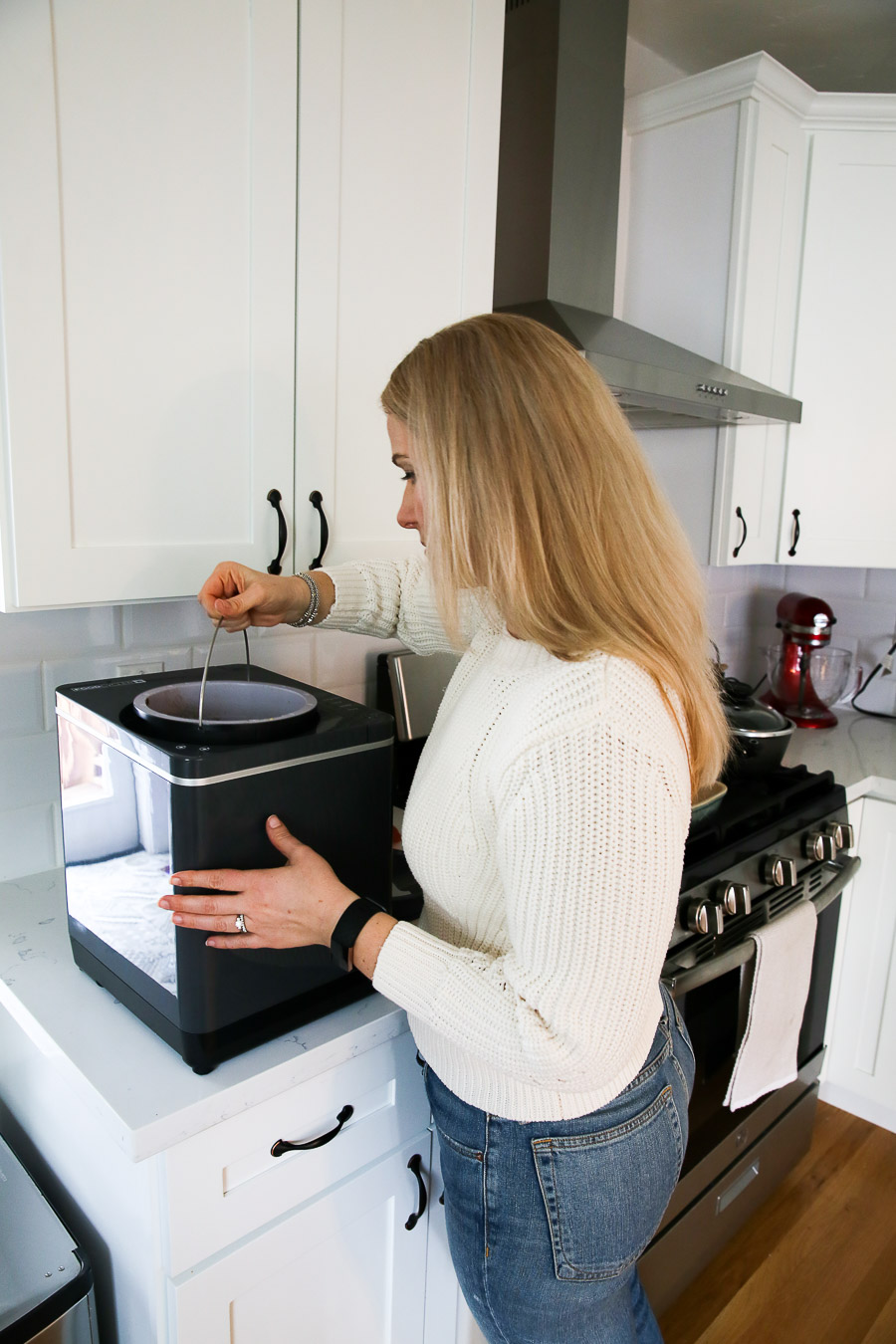 If you’re scared of composting, don’t worry. True story. This was me. and I’m not alone. Just ask, basically everybody else. Now that we have a garden space, I’m incredibly interested in composting, but it’s not exactly at the top of my list to figure out.

So when I learned there were indoor, electric composters, I flipped my lid, and reached out to the company to ask if I could try one in exchange for a review. Maybe I’m behind in only learning about them a few months ago. Better late than never, however, and now I’m making up for lost time. 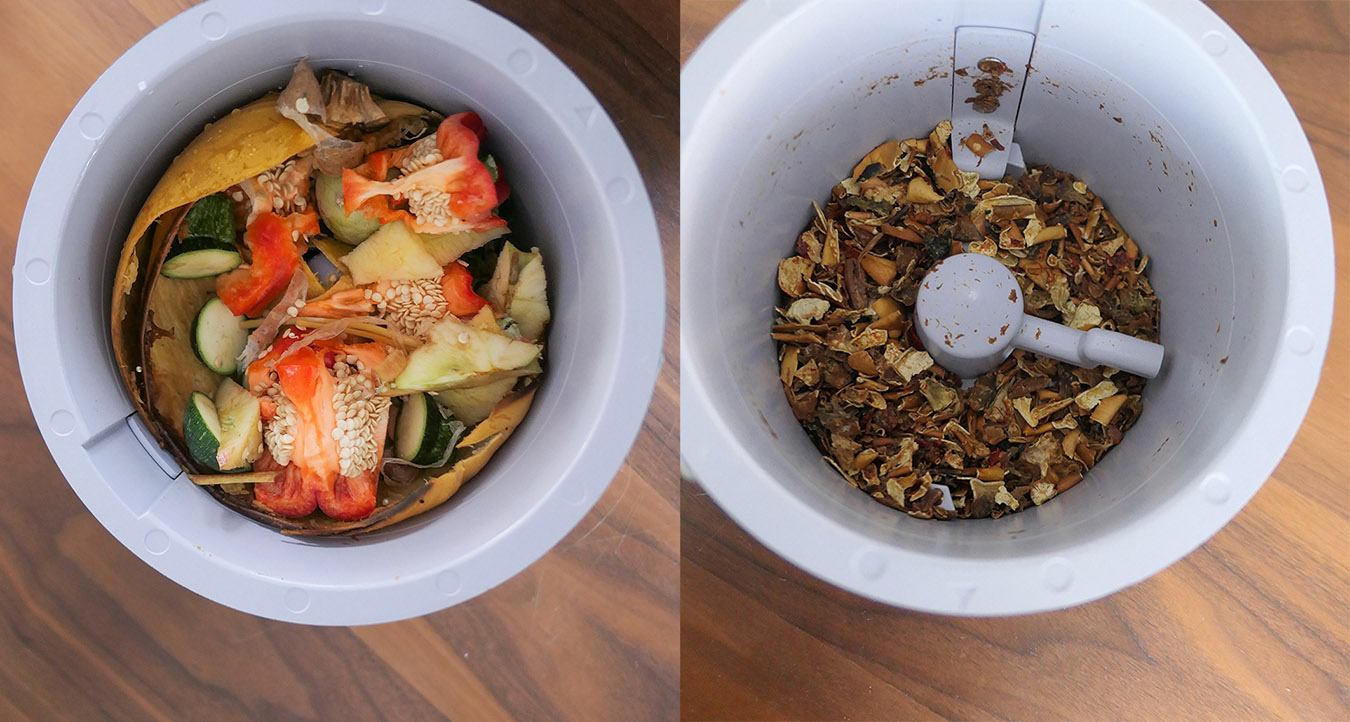 How Do You Use Your Electric Composter?

It’s really, really complicated. NOT! There’s this beautiful bucket. You fill it with food scraps (up to that line)…put it in the machine. Put the lid on. Here’s where it gets tricky…press the power button. That’s it. I mean. Then you have to wait, which is actually harder than you think.

Why is waiting hard? Ok. Maybe it isn’t for everybody. But I’m obsessed with seeing what my scraps look like when they’re done. I told you I was giddy about composting at home. I am starting to figure out what the outcome will be, but I’m not always right. 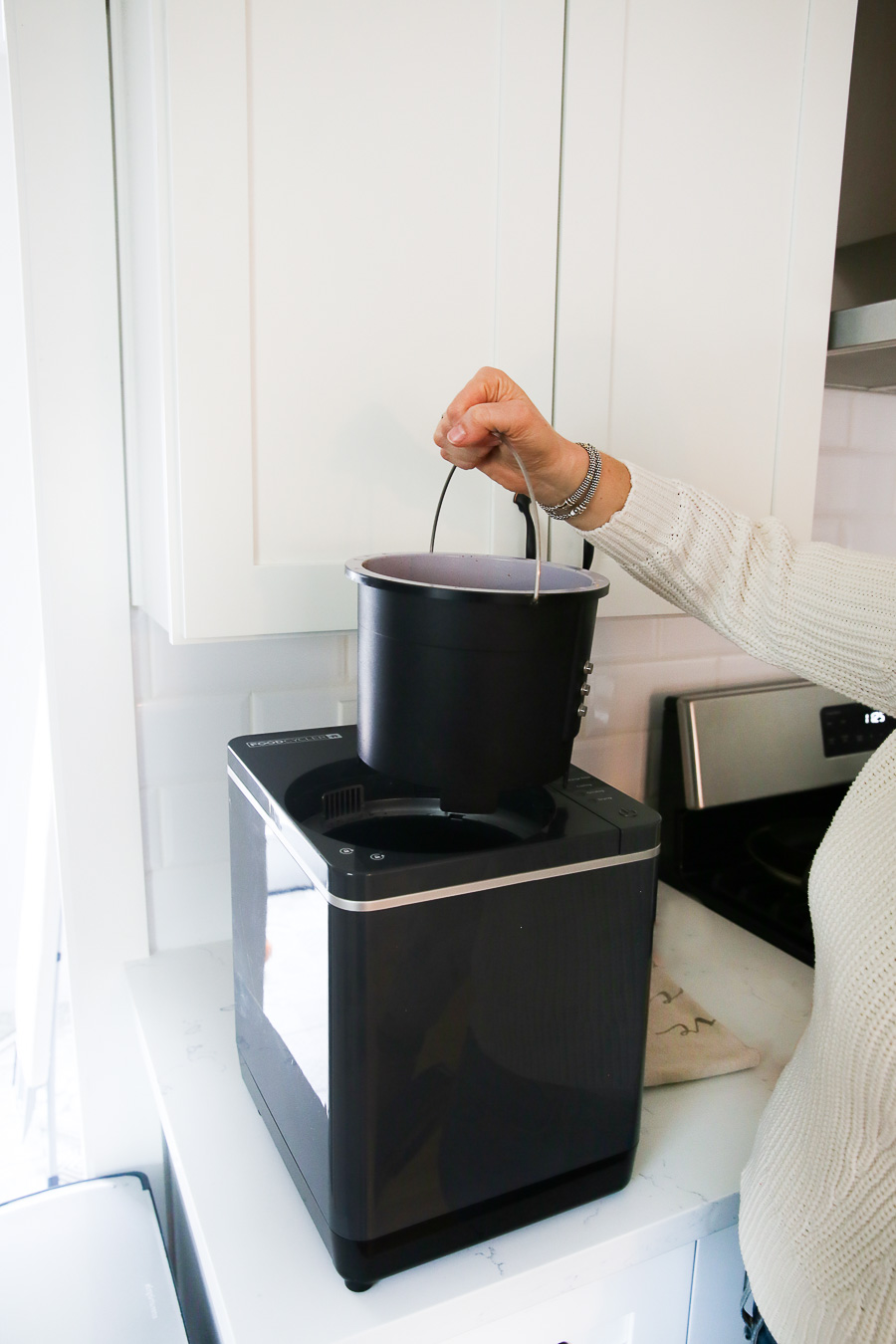 Why should you compost?

On my journey of more sustainable living, I’ve been learning more and more. I’m still very afraid of explaining why something is good/bad, however, because naysayers will latch on to a teeny, tiny mistake rather than focusing on the whole, but….

(please be nice in my efforts…)

Food waste is a major contributor of methane to our atmosphere. You’ll never guess but food rots and gets gross in the trash and at the landfill just like it can in your kitchen. In a landfill, however, it can’t get enough air or heat to breakdown without releasing harmful chemicals.

By composting, you help food waste breakdown in a great way. AND… you get goods for your garden (i.e. free, organic fertilizer).

The Foodcycler creates what they call a “foodilizer.” When you’re ready (a few weeks before planting), you mix it in 1:11 with soil. Since I started using the indoor composter in early winter, I’ve just been saving mine for gardening this spring! You can learn more about how to use the foodilizer here.

UPDATE: At times we have more foodilizer than I know what to do with. I always find happy recipients for this superpowered compost among friends and in local Facebook groups!

Why it’s better than traditional composting?

So if you’re already composting at home (YAY, YOU!!!), you may wonder why this indoor composter is that much better. Is it even worth it? The answer is, YES, even if only for the number of things that it can break down that aren’t normally compostable!

The upside to the Foodcycler* is what you can put in it. Besides fruit and veggies parts, egg shells, coffee grounds, etc., it also takes meat scraps and cheese, as well as chicken and fish bones! It really does eliminate every kind of food waste we have from going into the trash! 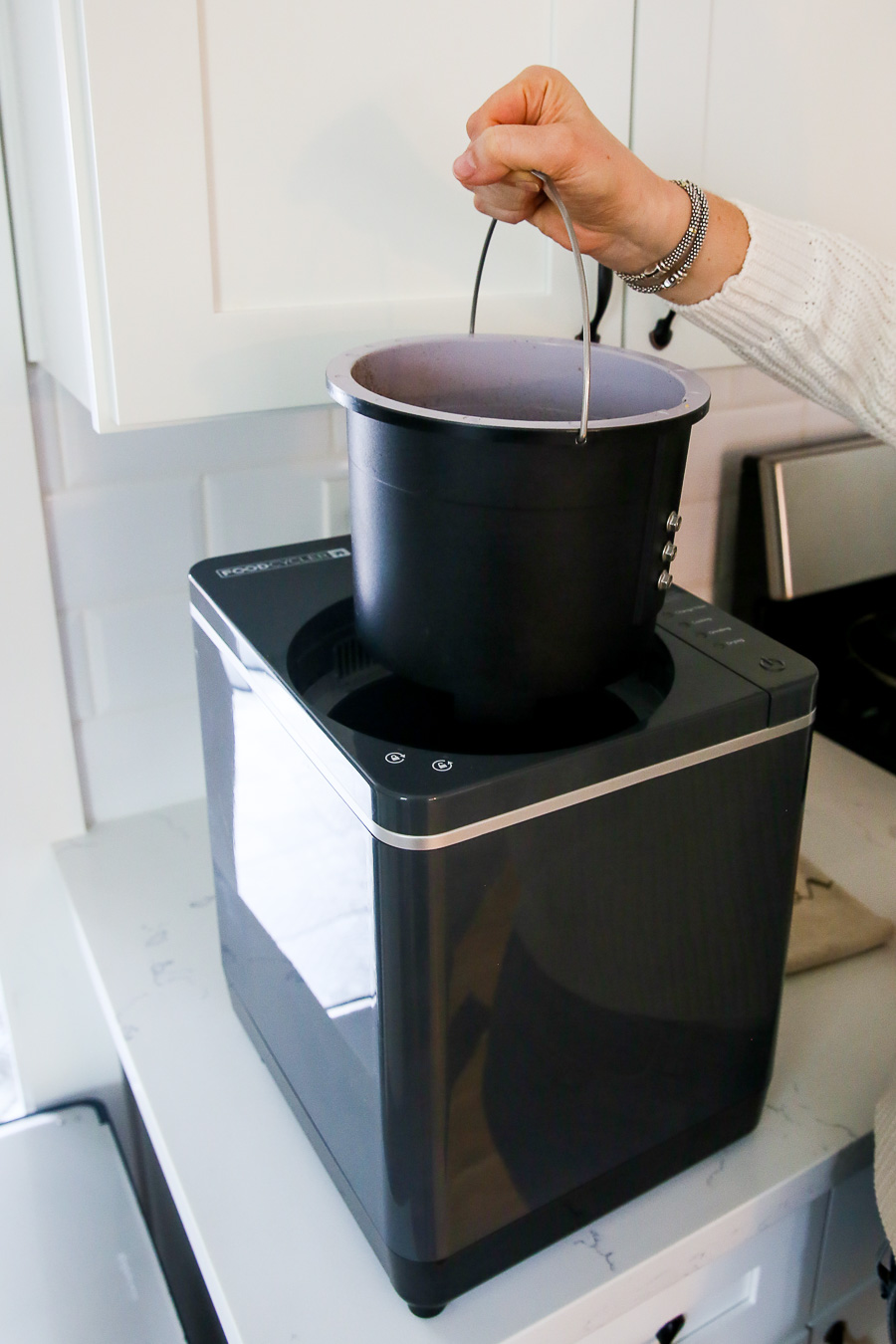 Why I Love The Foodcycler

Ok. So yay for indoor composting without smelly piles outdoors, but is it loud? Is there an odor? Is it annoying? The short answer is no.

The machine runs for 5-6 hours – yes, it’s a while, but you’re speeding up science, so let’s have some patience! But anyway… it isn’t loud at all.

At the end of the cycle, there is a bit of a smell (nothing that smells up the room – you just need to be close to it). I find that if you let it cool completely, however, the smell is mild and goes away almost instantly. We keep the foodilizer in a bin just off the kitchen in our laundry and it doesn’t smell at all! 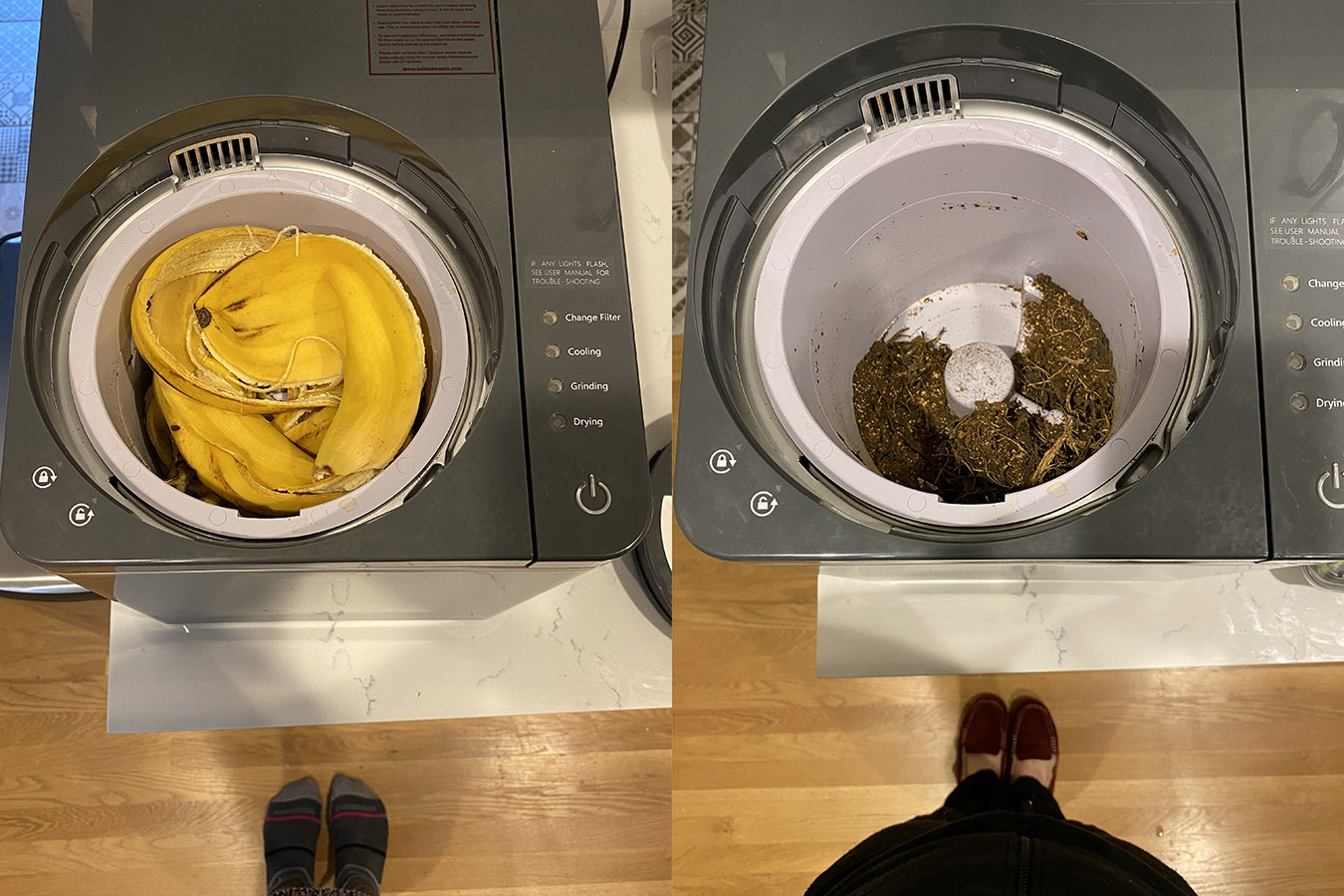 Annoying? Um. no. It’s loads of fun. I just think it’s the coolest thing. I love that we don’t really have any food waste. We take the trash out so much less frequently (IT NEVER SMELLS), so we can wait until the bag is totally full.

We currently store our composter in a low cupboard and place it on the counter only as needed.

In our house of two, we run it 2-3 times per week and usually 2 of those sessions are within a day of one another because of weekend food prep! We also usually eat at home about six nights per week, so there’s quite a bit of food cooking going on in our kitchen!

Food Cycle Science gave me this machine for an honest Foodcycler  review AFTER I REQUESTED IT! All opinions are of course my own. 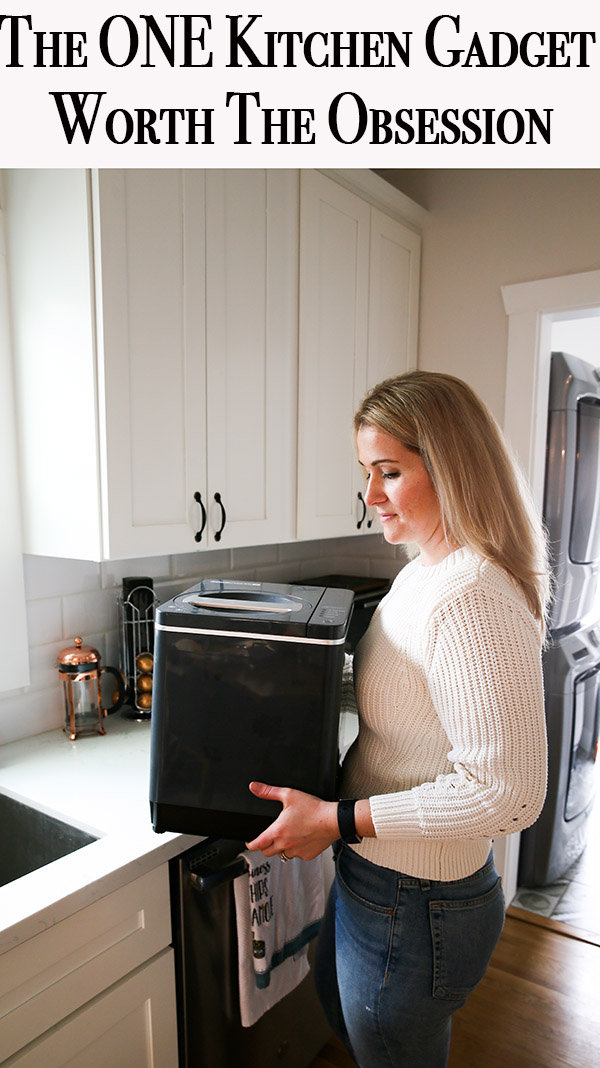