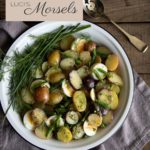 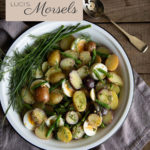 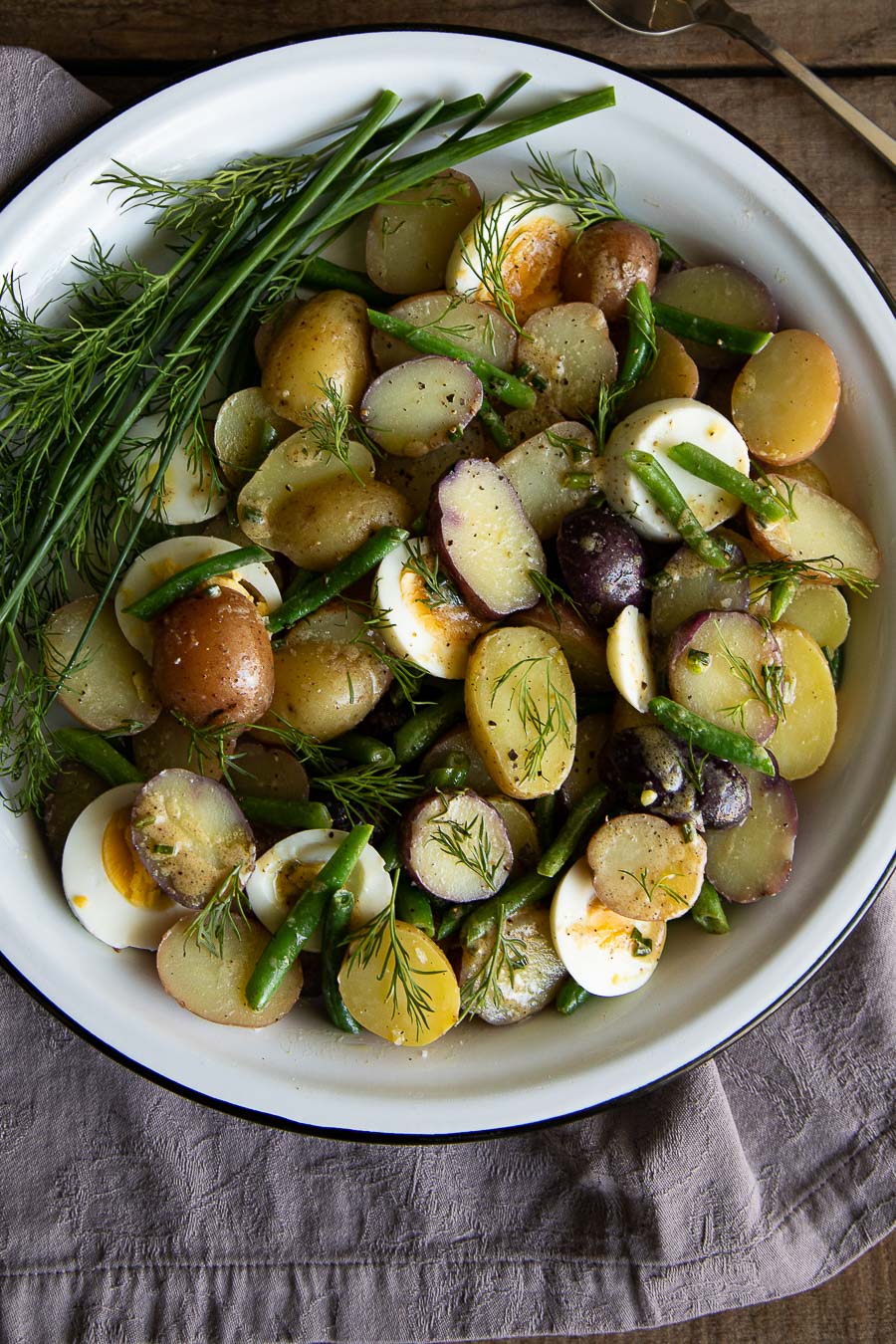 If you hate potato salad, hear me out with this French Potato Salad. I don’t like potato salad either, but this isn’t your run of the mill recipe for the classic side dish...

After the fabulous French-themed bridal shower my sister put on for me and our honeymoon in Southern france, I was obviously obsessed with everything French cuisine. Of course we’re not talking about macarons and beignets, but more the whole ingredients, simple flavors of the countryside. A celebration of food really.

So for a family get together, we were looking for some good recipes. I remembered a potato salad recipe that had an olive oil and vinegar dressing base rather than mayo or whatever is in the normal setup. What I found was this recipe from Leite’s Culinaria, so I made it with a few modifications… 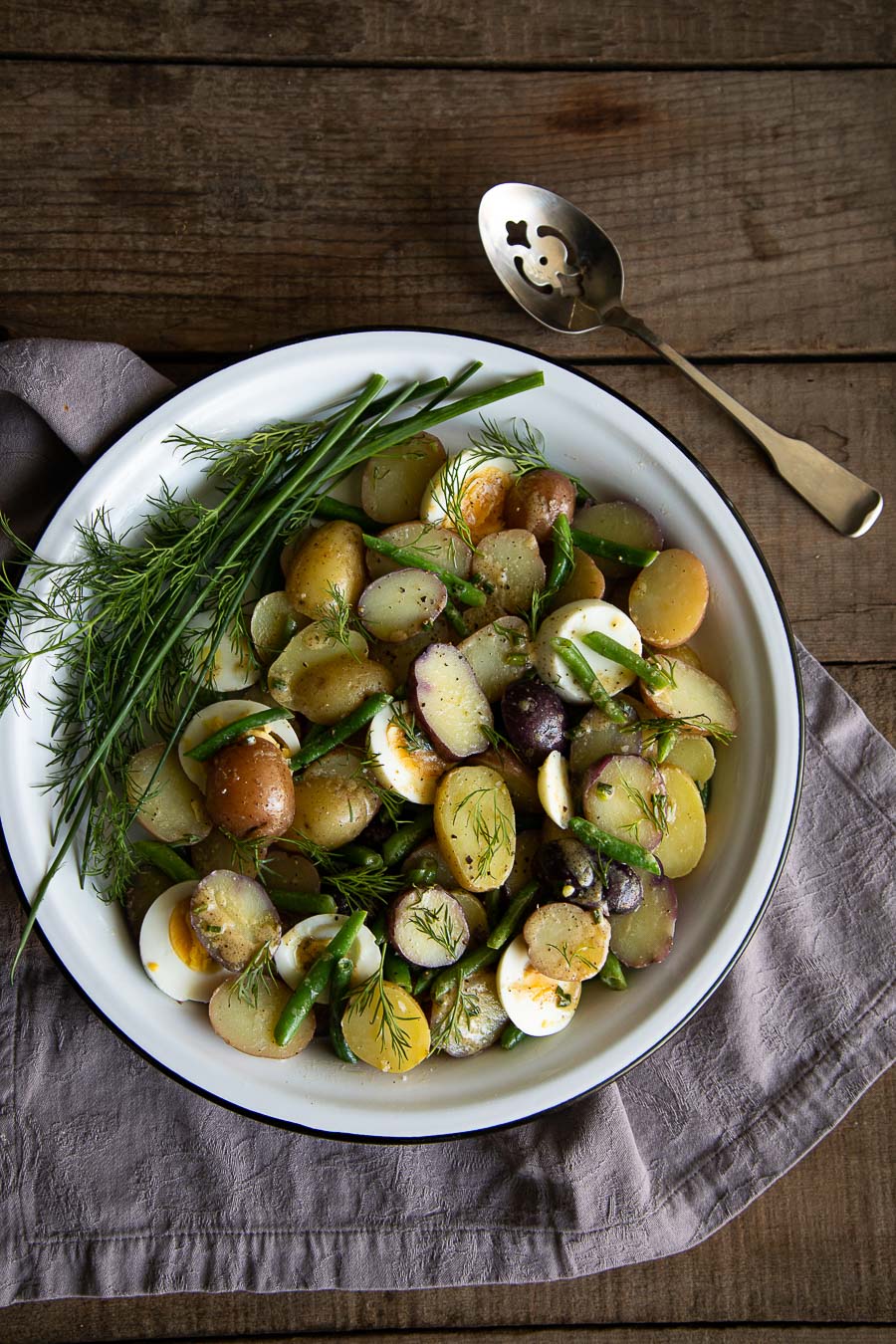 French potato salad is different than the dairy-based American version in a few ways. The main difference is that the dressing is oil and vinegar-based, with dijon mustard.

Second, it’s usually chock full of fresh herbs – as is the French culinary way, right? This recipe calls for dill, which I used to detest, but it was this salad that gave me a renewed appreciation for dill!

And this one is probably more stylistic than absolute, but the hard boiled eggs tend to be not quite so “hard,” and not so deconstructed. It’s the very broken down eggs that give American potato salad that yellow color. By gently cutting in pieces of egg, you can let each ingredient speak for itself! 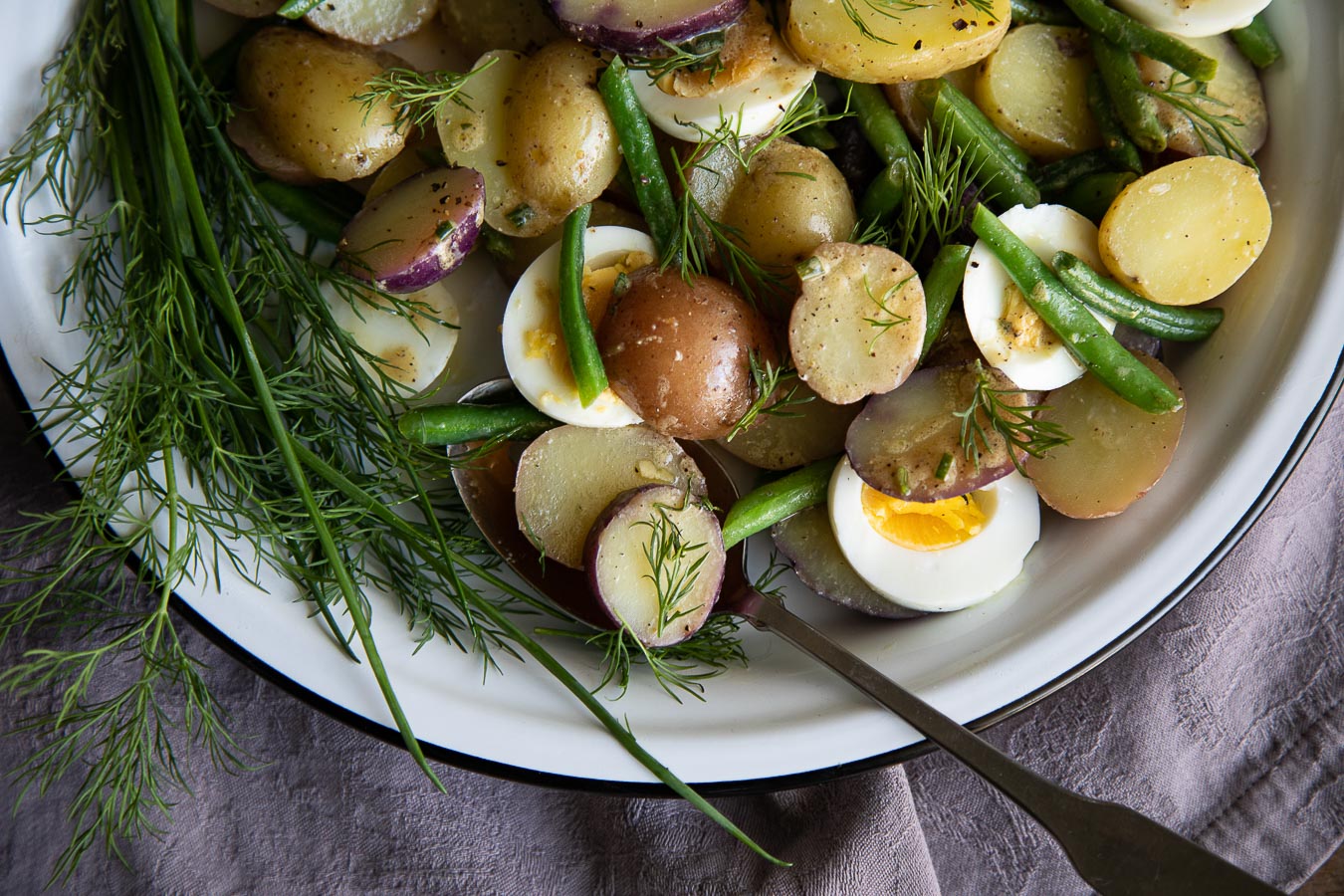 The great thing about how that recipe was written is that it let’s you do it all in one pot. It seems like a long process, but it lets you do it slowly. Since this summer salad should be made ahead of time, it’s very forgiving with a busy life, I think.

The recipe below lets you steam your potato and green beans on your own schedule, your own way. Then you can assemble it all together.

In between you can gander at the St. Remy Farmers Market (the best market I’ve ever been to) and read about these Avignon Day Trips! 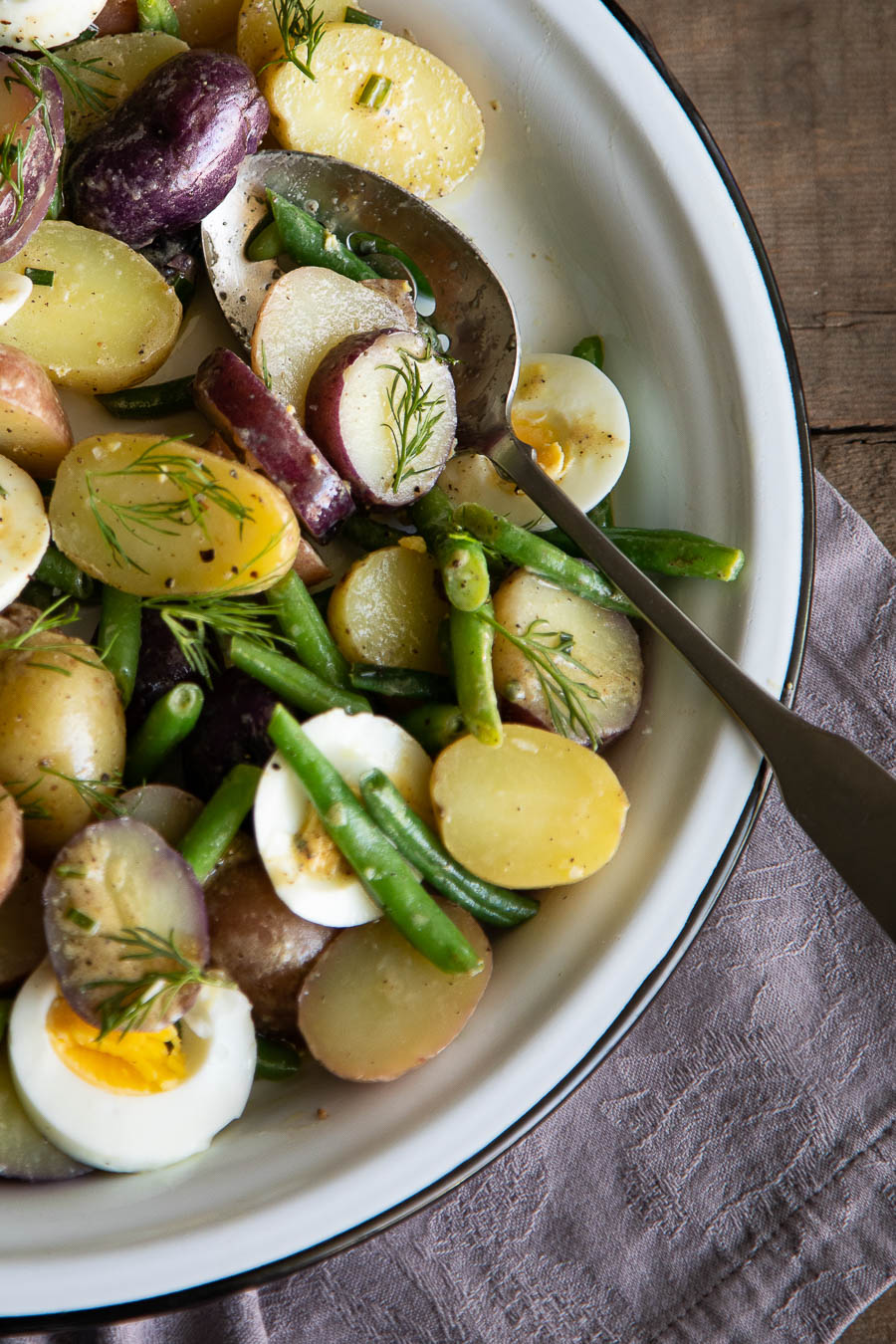 Is it Really the Best?

So, I told you this one was different. And it is, I have proof. I made this salad when my sister and her husband were eating with us. My brother-in-law sat down at the table and told me, loudly, that he didn’t like potato salad, but he tried it to be polite…and that he really liked it!

And that’s not the only time I’ve heard that. So skip the mayo, grab the oil and vinegar and whip up this dairy free French potato salad. 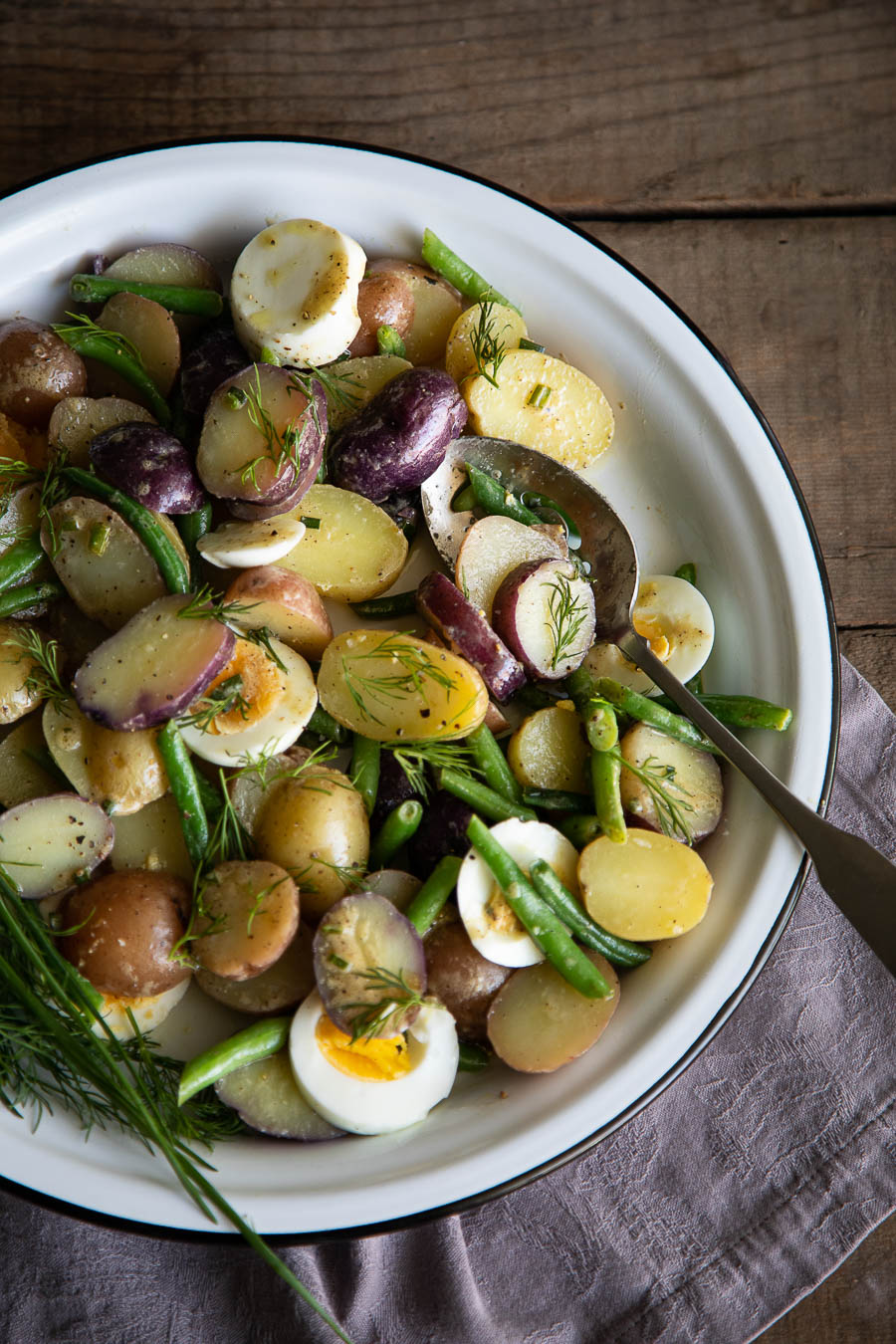 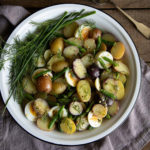