Remember the cheddar + chive cornmeal waffles?? Those were fairly epic in my humble opinion. Well now I’ve added the same twist to this savory french toast for a dish that’s good morning, noon, and night!

I’m usually a small breakfast person – happy with my yogurt and granola. But sometimes, I want a big, hearty breakfast. I love waffles, pancakes, and french toast, but even on those big breakfast days, I don’t usually order them.

Instead my fiance is subject to me stealing 1 or 2 bites of his and calling it good while I get a smaller something or other that’s far from indulgent! Frankly, all the syrup and powdered sugar, while scrumptious, is overwhelming to me. That’s why I’ve turned to savory takes on traditional morning fare. 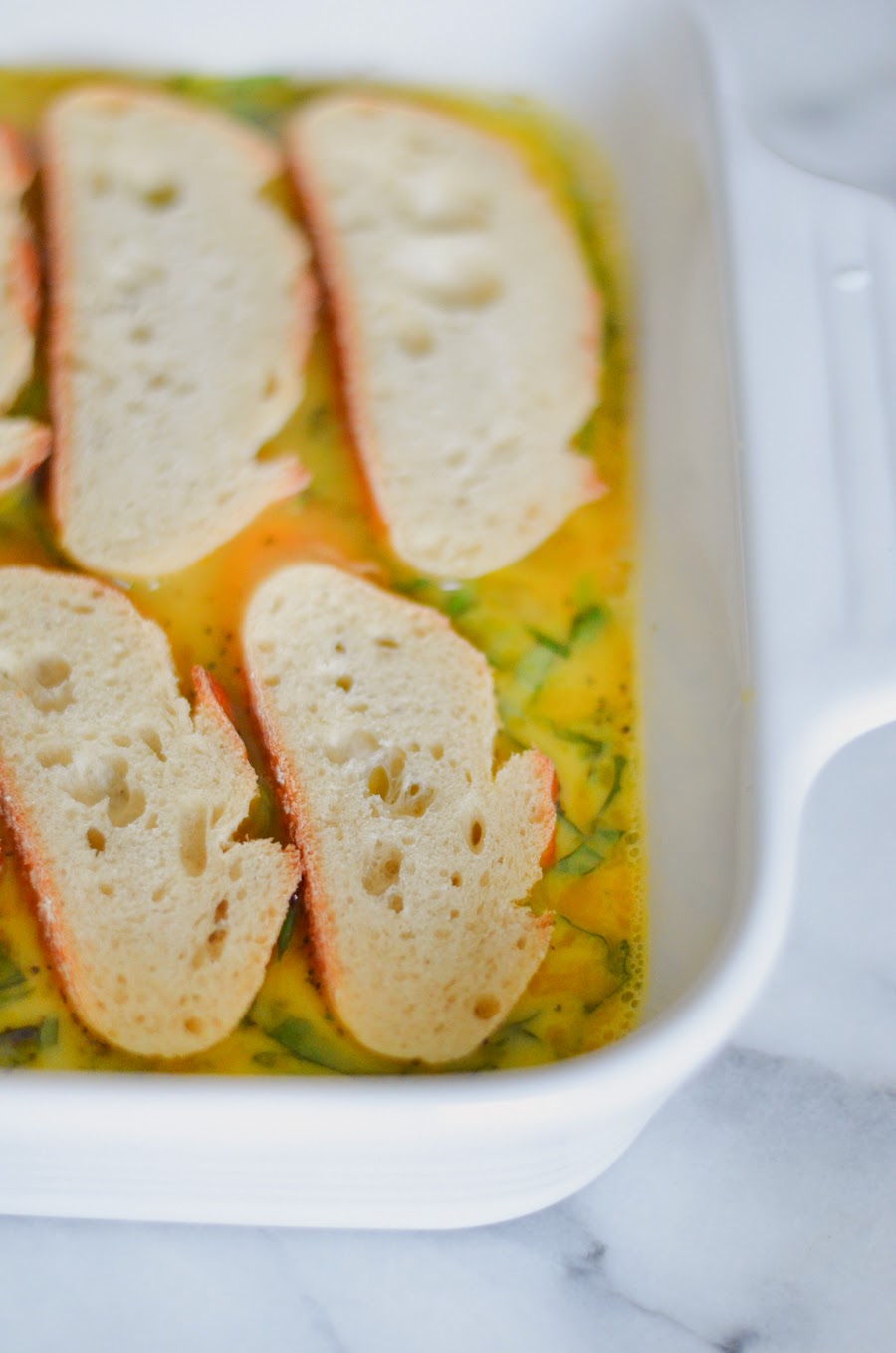 I really want to call this recipe “Italian French Toast,” but I realize that’s confusing. It’s basically your classic french toast recipe with some fresh basil. Because I’m infatuated with always having veggies, I layered the savory french toast slices over roasted eggplant.

The thing is, French toast isn’t actually sweet in and of itself. Except perhaps some cinnamon in the egg batter, it’s bread, eggs, and maybe milk. It’s the powdered sugar and syrup put on after that make it sweet.

So really savory french toast is just a switch up on the toppings – parmesan cheese and a tomato dipping sauce!

You could layer it over any veggies really – zucchini, onions, bell peppers, you name it! I roasted the eggplant slices (try roasted eggplant dip) with just salt and pepper – nothing fancy.

Serve it all with roasted garlic marinara that’s almost too easy to make and you’ve got a filling, healthier version of a classic meal. These small savory french toast slices are also great for a party. Skip the roasted veggies and serve them next to a batch of the marinara for easy dipping. It’s a no muss, no fuss option.

And these can be made ahead of time and reheated on the stovetop (though they don’t take long to make in a large frying pan). What to Serve with Savory French Toast?

I can think of three things to enjoy with this savory french toast. I always think this breakfast salad is a good idea – no matter the main dish.

This winter fruit platter would also be heavenly!

And then a breakfast protein of some kind would be great – bacon, chicken sausage, or ham immediately come to mind.

Finally, my brunch sangria is the perfect drink for any weekend brunch gathering! Roasted Garlic Marinara (can be made ahead)